It’s Saturday night at Penguicon. A few hours ago I blatantly pulled social rank on someone, and I am not ashamed. This is how it happened.

So, it all started when I was playing Dominion with my wife Cathy and a couple of friends in in the game room. Heather the swordmistress of Polaris (a woman as beautiful as she is deadly and one of my best friends) texted me saying “We have glow-in-the-dark beat sticks! Join us!”…and, after finishing the game, I joined Heather and a gaggle of my sword-geek friends in roaming around the party halls mock-dueling with the glow-in-the-dark foam beat sticks and making silly noises.

Came a point in our wanderings where we heard rumor that the Vikings were planning to raid the Romans, who are usually the pirates. To make sense of this, you need to know that Cathy’s and my friend Joe Saul (with which we have been known to do Internet Law panels at previous Penguicons) has a tradition of roaming the convention halls with a gang of friends in elaborate pirate costumes, pulling a ship-shaped cart full of strong grog which they dispense to all and sundry (and beauteous them pirate wenches be, arr!) . Spontaneous dancing has oft been induced by the boom box cleverly concealed in yonder vessel.

Well, except this year they changed it up a little, as the ship morphed into a columnated classical temple and everybody wore togas and legionary costume and the odd gladiatorial rig. And the wenches be just as beautiful in dancing silks, ave!

For some reason I never quite sorted out there had been another gang of people show up wearing seriously cheesy Viking costumes – plastic horned helmets with LEDs on. I was electrified by a rumor that the Vikings were planning to raid the Romans.

“My Viking blood calls to me!” I declaimed to my sword-geek friends, flourishing my glowing green foamy beat-stick above my head; “I must raid the Romans!” I duly scampered off after the Vikings, who were taking the elevators to the 14th floor to muster in preparation for their foray.

So I catch up with the Vikings, who are stripping for battle by stowing away their drinks cart (and the striped square-sail on a small boom that made it properly Viking).

“Can I join your raid, please?”, I said, waving my magic sword for effect. “Can I have a helmet?” Guy looks at me and says “Well, they’re reserved for members. You’d have to join I3.”

My eyes lit up with an unholy glee and I said “My name is Eric Raymond. Could I be considered a member?” He grinned and said “Ex officio” and handed me a cheesy helmet. With a blinking LED of my very own!

And thus it was that I joined the Viking raid as we stormed up the stairs to the 16th floor and charged the Roman party position. The Emperor Saul suggested we settle our differences with a dance-off, and much shaking of costumed booty ensued.

You know, I don’t try to pull hacker rank very often, but this seemed like the perfect time to do it. Those guys will probably be telling other geeks how ESR went a-Viking with them for years. There are pictures. And they insisted I keep the helmet. 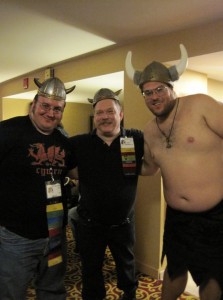