My usual audience is well aware why I am qualified to review Gabriella Coleman’s book, Coding Freedom, but since I suspect this post might reach a bit beyond my usual audience I will restate the obvious. I have been operating as the hacker culture’s resident ethnographer since around 1990, consciously applying the techniques of anthropological fieldwork (at least as I understood them) to analyze the operation of that culture and explain it to others. Those explanations have been tested in the real world with large consequences, including helping the hacker culture break out of its ghetto and infect everything that software touches with subversive ideas about open processes, transparency, peer review, and the power of networked collaboration.

Ever since I began doing my own ethnographic work on the hacker culture from the inside as a participant, I have keenly felt the lack of any comparable observation being done by outsiders formally trained in the techniques of anthropological fieldwork. I’m an amateur, self-trained by reading classic anthropological studies and a few semesters of college courses; I know relatively little theory, and have had to construct my own interpretative frameworks in the absence of much knowledge about how a professional would do it.

Sadly, the main thing I learned from reading Gabriella Coleman’s new book, Coding Freedom, is that my ignorance may actually have been a good thing for the quality of my results. The insight in this book is nearly smothered beneath a crushing weight of jargon and theoretical elaboration, almost all of which appears to be completely useless except as a sort of point-scoring academic ritual that does less than nothing to illuminate its ostensible subject.

This is doubly unfortunate because Coleman very obviously means well and feels a lot of respect and sympathy for the people and the culture she was studying – on the few occasions that she stops overplaying the game of academic erudition she has interesting things to say about them. It is clear that she is natively a shrewd observer whose instincts have been only numbed – not entirely destroyed – by the load of baggage she is carrying around.

END_OF_DOCUMENT_TOKEN_TO_BE_REPLACED

A couple of weeks ago a friend asked me how he could become more charismatic.

Because the term “charismatic” has unhelpful religious connotations, let’s begin by being clear what he was actually asking. A person is “charismatic” when he or she has the ability to communicate a vision to others in a way that makes them sign up for making it real. Sometimes the vision is large (“Change the world!”) sometimes it is relatively small (“Become as cool as me!”).

My friend asked me how he could become more charismatic because he has seen me do the charisma thing a lot. This relates to my previous blogging on practical prophecy. A prophet has to be charismatic, it’s a requirement to get people to actually move.

Before he asked me about it, I would not have thought charisma was something that could be explained in detail. But questions properly posed sometimes elicit knowledge the person answering was not consciously aware of holding. That happened in this case; I found myself explaining four modes of charisma.

Here is what I told him.

END_OF_DOCUMENT_TOKEN_TO_BE_REPLACED

A friend of mine recently posted this image of a hideous network-cable tangle: 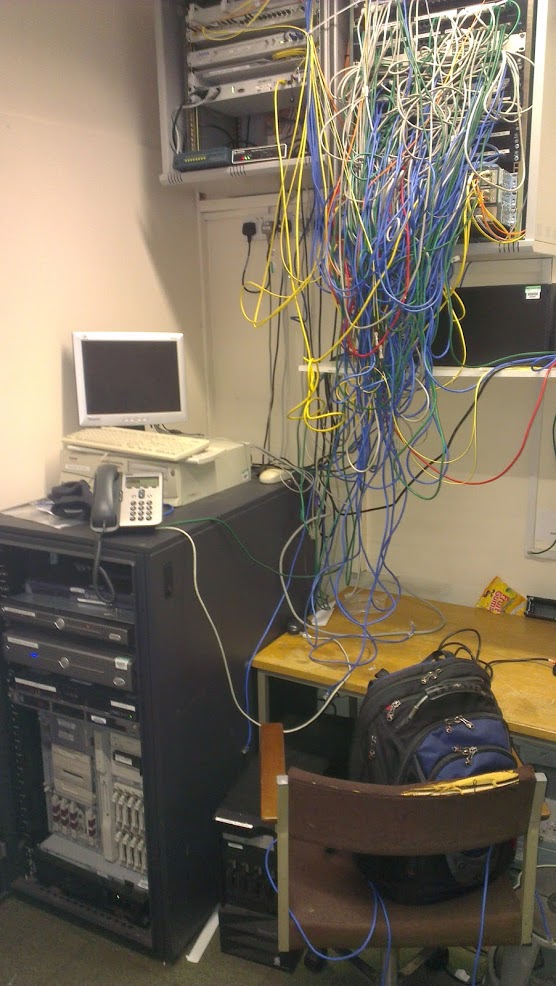 A hideous tangle of network cable.

I have invented an algorithm for fixing this kind of mess. Probably other people have developed the same technique before, but it wasn’t taught to me and I’ve never seen it written down. Here it is…

END_OF_DOCUMENT_TOKEN_TO_BE_REPLACED

For those of you who have been following my work on tools to muck out the swamp that is CVS, a new shovel: cvs-fast-export. Note, this is an alpha release for testing purposes; double-check the quality of any conversions you do with it carefully.

END_OF_DOCUMENT_TOKEN_TO_BE_REPLACED

You bait a trap for a mouse with tasty food. How do you bait a soul-trap for people too smart to fall for conventional religion? With half-truths, of course.

I bailed out of an attempt to induct me into a cult tonight. The cult is called Landmark Forum or Landmark Education, and is descended from est, the Erhard Seminars Training. The induction attempt was mediated by a friend of mine who shall remain nameless. He has attended several Landmark events, praises the program to the skies, and probably does not realize even now that he has begun to exhibit classic cult-follower symptoms (albeit so far only in a quite a mild form – trying as hard as he did to to recruit me is the main one so far).

Oh, I dunno. Maybe it was all the shiny happy Stepford people with the huge smiles and the nameplates and the identical slightly glassy-eyed affect greeting us several times on the way to the auditorium. Maybe it was the folksy presenter with the vaguely Southern accent spewing pseudo-profundities about “living into your future” and “you will get Nothing from this training” (yes, you could hear the capital N). Maybe it was the parade of people telling stories about how broken they were until they found Landmark.

END_OF_DOCUMENT_TOKEN_TO_BE_REPLACED

The 2.13 release of reposurgeon has in it maybe the coolest new feature I’ve ever implemented in five minutes of programming – graphical visualization of a repository’s commit DAG.

END_OF_DOCUMENT_TOKEN_TO_BE_REPLACED

Last month I added CVS-reading support to reposurgeon. The reason I haven’t blogged in ten days is that this pulled me down a rathole out of which I am just now beginning to emerge. And now I have a a request for help – I need to collect some perverse CVS repositories, preferably relatively small ones.