I’ve been thinking about how to build a better IRC client recently.

The proximate cause is that I switched to irssi from chatzilla recently. In most ways it’s better, but it has some annoying UI quirks. Thinking they’d be easy to fix, I dug into the codebase and discovered that it’s a nasty hairball. We’ve seen projects where a great deal of enthusiasm and overengineering resulted in code that is full of locally-clever bits but excessively difficult to modify or maintain as a whole; irssi is one of those. Even its maintainers have mostly abandoned it; there hasn’t neen an actual release since 2010.

This is a shame, because despite its quirks it’s probably the best client going for serious IRC users. I say this because I’ve tried the other major contenders (chatzilla, BitchX, XChat, ircii) in the past. None of them really match irsii’s feature set, which makes it particularly unfortunate that the codebase resembles a rubble pile.

I’m nor capable of stumbling over a situation like this without thinking about how to fix it. And yesterday…I had an insight.

END_OF_DOCUMENT_TOKEN_TO_BE_REPLACED

I’ve been experimenting with tiling window managers recently. I tried out awesome and xmonad, and read documentation on several others including dwm and wmii. The prompt cause is that I’ve been doing a lot of surgery on large repositories recently, and when you get up to 50K commits that’s enough to create serious memory pressure on my 4G of core (don’t laugh, I tend to drive my old hardware until the bolts fall out). A smaller, lighter window manager can actually make a difference in performance.

More generally, I think the people advocating these have some good UI arguments – OK, maybe only when addressing hard-core hackers, but hey we’re users too. Ditching the overhead of frobbing window sizes and decorations in favor of getting actual work done is a kind of austerity I can get behind. My normal work layout consisted of just three big windows that nearly filled the screen anyway – terminal, Emacs and browser. Why not cut out the surrounding cruft?

I wasn’t able to settle on a tiling wm that really satisfied, though, until my friend HedgeMage pointed me at i3. After a day or so of using it I suspect I’ll be sticking with it. The differences from other tiling wms are not major but it seems just enough better designed and documented to cross a threshold for me, from interesting novelty to useful tool. Along with this change I’m ditching Chatzilla for irsii; my biggest configuration challenge in the new setup, actually, was teaching irssi how to use libnotify so I get visible IRC activity cues even when irsii itself is hidden.

END_OF_DOCUMENT_TOKEN_TO_BE_REPLACED

Today, while doing research to answer some bug mail, I learned that all versions of Android since 4.0 (Ice Cream Sandwich) have used gpsd to read the take from the onboard GPS. Sadly, gpsd is getting blamed in some quarters for excessive battery drain. But it’s not gpsd’s fault! Here is what’s actually going on.

END_OF_DOCUMENT_TOKEN_TO_BE_REPLACED

I shipped reposurgeon 2.29 a few minutes ago. The main improvement in this version is speed – it now reads in and analyzes Subversion repositories at a clip of more than 11,000 commits per minute. This, is, in case you are in any doubt, ridiculously fast – faster than the native Subversion tools do it, and for certain far faster than any of the rival conversion utilities can manage. It’s well over an order of magnitude faster than when I began seriously tuning for speed three weeks ago. I’ve learned some interesting lessons along the way.

END_OF_DOCUMENT_TOKEN_TO_BE_REPLACED

It was inevitable, I suppose; reposurgeon now has its own Emacs mode.

The most laborious task in the reposurgeon conversion of a large CVS or Subversion repository is editing the comment history. You want to do this for two reasons: (1) to massage multiline comments into the summary-line + continuation form that plays well with git log and gitk, and (2) lifting Subversion and CVS commit references from, e.g., ‘2345’ to [[SVN:2345]] so reposurgeon can recognize them unambiguously and turn them into action stamps.

In the new release 2.22, there’s a small Emacs mode with several functions that help semi-automate this process.

END_OF_DOCUMENT_TOKEN_TO_BE_REPLACED

I released reposurgeon 2.20 today, with various minor improvements in the graph command and the behavior of repodiffer. Which, mainly, gives me all the excuse I need for this: 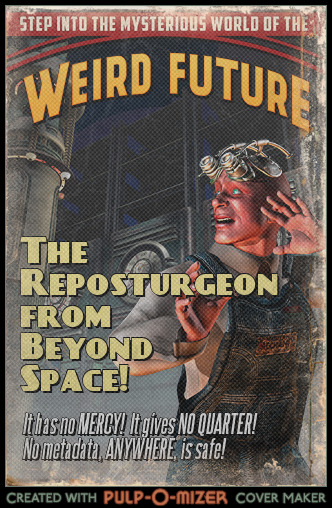 The following question appeared in my mailbox today:

If a certain program (that you need) was proprietary, and its open-source counterpart was (currently) 40% slower. Which would you use, the open-source one or the proprietary one?

The answer is: it depends. I’m going to answer this one in public because it’s a useful exercise in thinking about larger tradeoffs.

END_OF_DOCUMENT_TOKEN_TO_BE_REPLACED

For those of you who have been following my work on tools to muck out the swamp that is CVS, a new shovel: cvs-fast-export. Note, this is an alpha release for testing purposes; double-check the quality of any conversions you do with it carefully.

END_OF_DOCUMENT_TOKEN_TO_BE_REPLACED

The 2.13 release of reposurgeon has in it maybe the coolest new feature I’ve ever implemented in five minutes of programming – graphical visualization of a repository’s commit DAG.

END_OF_DOCUMENT_TOKEN_TO_BE_REPLACED

Last month I added CVS-reading support to reposurgeon. The reason I haven’t blogged in ten days is that this pulled me down a rathole out of which I am just now beginning to emerge. And now I have a a request for help – I need to collect some perverse CVS repositories, preferably relatively small ones.

END_OF_DOCUMENT_TOKEN_TO_BE_REPLACED

Today’s very special non-world-ending software release, triggered if not originated from here at Eric Conspiracy Secret Laboratories is the amazing Zen simulation, Robot Finds Kitten. I bow in respect before Leonard Richardson and the other giants of kitten-finding history and am humbly proud to be counted among the select few who have contributed to this monumental, er, monument.

Get yer hot fresh tarball right here. It will improve your sex life, clear up your financial problems, cure your acne, and make you as a god among men. Would I lie?

Yes, that’s right, the just-shipped reposurgeon 2.11 can now read – though not write – CVS repositories. To get it to do this, I got my lunch-hooks on a relatively old program called cvsps that assembles changesets out of CVS repositories for human inspection. I gave it a –fast-export reporting mode that emits a fast-import stream instead, so now CVS has a universal exporter that will talk to any version-control system that speaks import streams. Oh, yes, and I’m maintaining cvsps now too – applause to David Mansfield, who both did a very good job on that code and sees clearly that its original use case is obsolete and –fast-export is a better way forward.

Two substantial releases of different projects in a day is a fast pace even for me. cvsps-3.0 and reposurgeon-2.11; two great tastes that taste great together.

Well-designed software suites should not only be correct, they should be able to demonstrate their own correctness. This is why the new 2.10 release of reposurgeon features a new tool called ‘repodiffer’. And yes, that is what it sounds like – a diff tool that operates not on files but entire repository histories. You get a report on which revisions are identical, which are different, and in the latter case where the differences are, down to which files don’t match. Commits to be paired are matched by committer and commit date. Like reposurgeon, it will work on any version-control system that can emit a fast-import stream.

END_OF_DOCUMENT_TOKEN_TO_BE_REPLACED

I had said I wasn’t going to do it, but…I experimented, and it turned out to be easier than I thought. Release 2.7 of reposurgeon writes (as well as reading) Subversion repositories. With the untested support for darcs, which should work exactly as well as darcs fast-export and fast-import do, this now brings the set of fully-supported version-control systems to git, hg, bzr, svn, and darcs; reposurgeon can be used for repository surgery and interconversion on any of these.

END_OF_DOCUMENT_TOKEN_TO_BE_REPLACED

I have submitted an essay to the Stanford Law Review for publication. I didn’t tick the box for “exclusive”, so I think I can blog it as well. It’s a reply to Andrew Tutt’s essay on Software Speech.

END_OF_DOCUMENT_TOKEN_TO_BE_REPLACED

I shipped reposurgeon 2.0 a few days ago with the Subversion support feature-complete, and a 2.1 minor bugfix release this morning. My previous release announcement was somewhat rushed, so here is a more detailed one explaining why anybody contemplating moving up from Subversion should care.

To go with this, there is a new version of my DVCS Migration HOWTO.

END_OF_DOCUMENT_TOKEN_TO_BE_REPLACED

autorevision extracts metadata about the head version of your repository. This program is meant to be used by project build systems to extract properties that can be used in software version strings. It can create files containing variable and macro definitions suitable for C, C++, sh, Python, Perl, PHP, lua, Javascript, and header files suitable for use with preprocessing Info.plist files.

This was a sort of spinoff from irker, though I’ve decided it not to use it there because I want to keep irkerd and irkerhook.py in single self-contained files.

No, I don’t know dak180’s real name. He’s a pretty good collaborator, though.

I nearly issued a forking threat a few minutes ago. Only the second time I’ve felt a need to do that and the first was in 1993, so this is not something I do casually. And I drew back from the brink.

But I may have to if the maintainer I’m dealing with doesn’t clean up his act. His library is critical to one of my projects, but his behavior has been increasingly sloppy and erratic lately. He made a serious design mistake which he’s been trying to paper over with kluges; the kluges have made the code unstable and the latest shipped version is actually broken to the point of unusability without a patch.