Some weeks ago I was tremendously amused by a report of an exchange in which a self-righteous vegetarian/vegan was attempting to berate somebody else for enjoying Kentucky Fried Chicken. I shall transcribe the exchange here:

I am no fan of KFC, I find it nasty and overprocessed. However, I found the vegan rant richly deserving of further mockery, especially after I did a little research and discovered that the words “bloodmouth” and “carnist” are verbal tokens for an entire ideology.

First thing I did was notify my friend Ken Burnside, who runs a T-shirt business, that I want a “bloodmouth carnist” T-shirt – a Spinal-Tap-esque parody of every stupid trash-metal tour shirt ever printed. With flaming skulls! And demonic bat-wings! And umlauts! Definitely umlauts.

Once Ken managed to stop laughing we started designing. Several iterations. a phone call, and a flurry of G+ messages later, we had the Bloodmouth Carnist T-shirt. Order yours today! 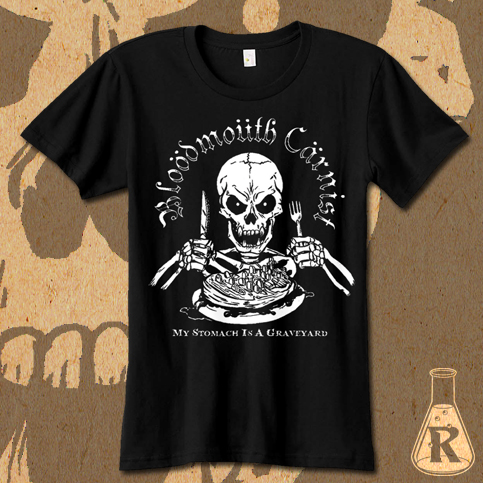 By the way, the skull on that shirt is me, sort of. Ken asked me to supply a photo reference, so my wife and I went to a steakhouse and she snapped a picture of me grinning maniacally over a slab of prime rib. For SCIENCE!

This had consequences. An A&D regular challenged me in private mail to explain why my consequentialist ethics don’t require me to be a vegetarian.

I broadly agree with Sam Harris’s position in The Moral Landscape that the ground of ethics has to be the minimization of pain. But I add to this that for pain to be of consequence to me it needs to be have an experiencer who is at least potentially part of a community of reciprocal trust with me. Otherwise I would be necessarily paralyzed by guilt at killing bacteria every time I breathe.

The community of (potential) reciprocal trust includes all humans, possibly excepting a tiny minority of the criminally insane. It presumptively includes extraterrestrial sophonts, if we ever discover those. I think it is prudent and conservative (in the best sense of that term) to include borderline and near-borderline sophonts like higher primates, elephants, whales, dolphins, and squid. In principle it includes any animal that can solve the other-minds problem – which probably includes some of the brighter birds. I think this category can be roughly delimited using the mirror test.

For different reasons, the community of trust includes non-sophont human commensals. My cat, Sugar, for example, who shows only dim and occasional flashes of behavior that might indicate she models other minds, but has a strong mutual-trust relationship with my wife and myself. We know what to expect of each other; we like each other. This is a kind of reciprocity with ethical significance even though the cat is not sophont.

Another way to put this is to remember the Golden Rule, “Do as you would be done by” and ask: what animals have the ability to follow it, the right kind of informational complexity required to support it?

Cows, pigs, chickens, and fish are not part of my potential community of trust. They don’t have minds capable of it – the informational complexity required doesn’t seem to be there at all (though suspicions have occasionally been raised about pigs; I’ll revisit this point). Thus, their deaths are not intrinsically ethically significant to me, any more than harvesting a head of lettuce is.

Cruelty is a different matter. I think we ought not engage in cruelty because it is damaging and coarsening; people who make a habit of being cruel to non-sophonts are more likely to become cruel and dangerous to sophonts as well. Thus, merely killing a food animal is ethically neutral, but careless cruelty towards one is wrong and deliberate cruelty is evil.

(Nevertheless, I report that the above vegan rant inculcated in me a desire to stomp into a roomful of vegans and demand my food “twisted and crushed with cruelty”. I really don’t like it when people try to jerk me around by my sensibilities as though I’m some kind of idiot who is unreachable by reasoned argument. I find it insulting and want to punch back.)

These criteria could interact in interesting ways, and there are edge cases that need more investigation. I think I would have to stop eating pork if pigs could count the way that (for example) crows can – some pigs reportedly come close enough to passing the mirror test to worry me a little. I can readily imagine that pigs bred for intelligence might come near enough to sophont to be taboo to me. On the other hand, a friend who grew up on a hog farm assures me that pigs bred for meat are stone-stupid; according to her, it’s only wild pigs I should be even marginally concerned about.

Otters are another interesting case; they seem very playful and intelligent in the wild, occasionally use tools, and can form affectionate bonds with humans. I’d very much like to see them mirror-tested; in the meantime I’m quite willing to to give them the benefit of the doubt and consider them taboo for killing and eating.

There you have it. The bloodmouth carnist theory of animal rights. Now if you’ll excuse me I’m going to go have a roast beef sandwich for lunch.