I’ve been meaning to put together a running plot of U.S. smartphone marketshare for some time. The monthly press release from the market research firm comScore contain enough information to do it, but you have to stitch a number of them together as they only report the covered month and the third previous month. Stitching all the data together is actually rather revealing.

First, the raw numbers. All the rows are market share percentages except the last, “Smartphones”, which is the total size of the smartphone userbase in millions. The March 2010 figures are missing because of a retrieval glitch on the comScore website; I’ve been promised the relevant document will be restored and the numbers mailed to me. 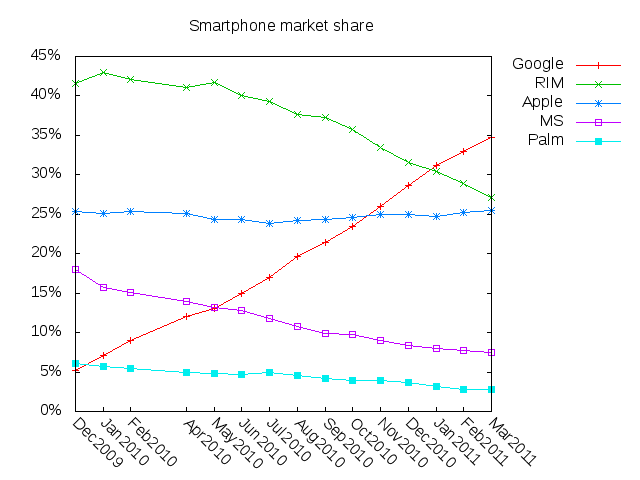 It’s unclear what’s going on with Apple, but there are a couple of conspicuous absences in its trend. There’s no bump from the iPhone 4V release at the beginning of February, and no obvious effect from all those cheap 3GS refurbs that AT&T has been flogging. It looks rather as if Apple marketing is running as fast as it can to stay in place, and not very much as though Apple is capturing a lot of dumbphone conversions.

I’ll update these figures and post another plot when the April report comes out. In the meantime, talk amongst yourselves.

UPDATES: I was able to get more historical numbers, clear back to December 2009, and one of my records has calculated a good estimate of one I was missing from comScore’s data. The post has been revised accordingly.