Oh, my stars and garters. A pro-firearms story in the New York Times? 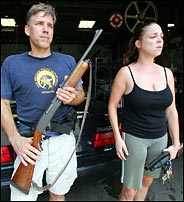 Yes, children, it has actually happened: Police and Owners Begin to Challenge Looters (link via InstaPundit). Property owners with guns maintaining civil order in their neighborhood are cited approvingly. There’s even a picture of a handsome armed couple “on the lookout for looters”.

I think I’m more shocked by this than I was by the hurricane. It’s bylined “FELICITY BARRINGER and JERE LONGMAN”; I wonder what life is going to be like for them at the Grey Lady’s next struggle session.